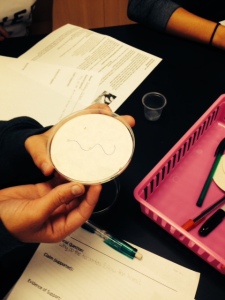 Today I finished working through the concept map I had planned for CER training with the honors kids. I wanted to introduce it slowly and provide them a number of examples in which to apply the CER method. I did graphic data, a model, and an experiment with them and it flowed nicely.

Today they worked on the old termite/Bic pen lab. Basically, termites follow specific Bic pen trails on paper. They were to work with claims, collect evidence and then create a reasoning statement. Again, here I gave them the claims but with more time I would have them generate as a group. They had a petri dish with filter paper to write on and a number of different pen types and colors. The claims were that termites were visual and follow lines, they work in groups and pen color does not matter, or they are using pheromones mimicked by the pen and follow that.

They worked through an explanation tool but also just used colored dots to chart their ideas. 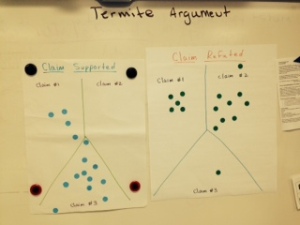 In AP biology students are beginning to work on applying a discovery to a scientific process. We are using the HHMI short film Natural Selection in Humans and the sickle cell/malaria connection to model this. Students will walk through the discovery by Tony Allen in the 1950’s and then apply it to hypotheticals like how global temperature increase might affect incidence of malaria and sickle cell in Africa.

Tomorrow they will begin working with statistics in biology.

I bought materials yesterday to set up 8 tabletop ecosystems in Mason jars. Each ecosystem has Hornwort, a moss ball, a snail and a shrimp. I also have 8 jars with just plants, and two with just water as controls.

The goals are long term investigation of the ecosystem in food webs/chains, nutrient cycles, and niche. This was born out of being totally bored with traditional teaching of these things. I am trying to think of small ways to model biology and although it is difficult, things like this are fun and very visual.

Reflections on the dynamics of teaching

180 Blog and Thoughts on Teaching and Biology